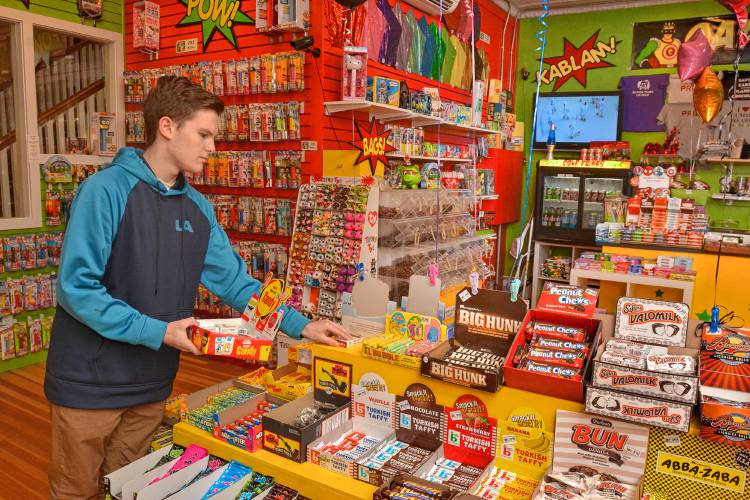 This article caught our eye, so we wanted to share it! We’ve continuously stated that we are seeing a mindset shift from the younger generation of business professionals, operators and entrepreneurs. More and more are starting to see the value of entrepreneurship through acquisition. Meaning, they are interested in purchasing existing businesses or franchises versus starting one from scratch. This move makes sense, it’s less risky and your impact is immediate. Also, on a deep level, not only are you the “boss” but you’re not trading your life for money on someone else’s term. Here’s the article:

Standing in Captain Candy surrounded by over 175 varieties of candy, 18-year-old Levi Smith has what many little kids dream of: their very own candy shop.

Although admittedly fond of candy, Smith didn’t purchase Captain Candy because of his sweet tooth. The recent high school graduate from Chesterfield was researching businesses for sale online when the store’s listing caught his eye.

“Candy is really fun, it’s an exciting thing,” Smith, a student at Holyoke Community College, said. “I’ve always wanted to own a business, and the opportunity was presented to me, so I took it.”

After emailing the former owner, Nolan Anaya, the two met up to discuss the transaction. Impressed by Smith’s youth and determination, Anaya handed the keys over to the 18-year-old with hope. Smith took out a loan with the help of his parents, who were co-signers, and became Captain Candy’s official owner April 1.

“I ended up selling to Levi because it somehow felt appropriate that I sold a candy store to the next generation of entrepreneurs,” Anaya said. Despite his age, Anaya noted, Levi understands the concepts of owning a small business and is confident that the store will continue to prosper.

Smith began working at Captain Candy two weeks ago with Anaya’s guidance. Under their agreement, Anaya will train Smith for 75 hours, teaching the new owner how to operate and manage the store as he had done for a decade. He will check up on the store through the end of 2019, ensuring that everything runs smoothly and offering advice to Smith.

The store, on the lower level of Thornes Marketplace, separates itself from other candy stores. With colorful walls and an eclectic collection of candy including Pop Rocks, candy cigarettes and jawbreakers, the atmosphere is one of nostalgia. Anaya wanted Captain Candy to emulate this feeling from day one and credits it for the store’s success.

“The nostalgia candy is a total time machine, and I’ve spent a lot of time on sourcing as much of the older stuff as I can find,” Anaya said. “The inside of Captain Candy was designed to feel like you’re inside a comic book with the displays’ reds, greens and yellows. It makes you feel happy as soon as you walk in.”

Anaya, 57, does not plan to retire any time soon. He’ll be making Grateful Dead T-shirts and selling them in parking lots at the Green River Festival this summer.

Smith plans on maintaining the store’s unique character and color schemes for years to come. The only additions that he has planned are a new refrigerator with more room for an expanded drink selection and new varieties of candy alongside the usual assortment.

The candy shop is not the beginning of Smith’s career as an entrepreneur. For two years in middle school, Smith saved up his money to buy a 3-D printer and began selling printed objects.

“I originally bought it because I was interested in it,” Smith said. “It was cool, new technology, and I decided I want to make money off of this. I made a website, I talked to people in person, and asked them if they wanted anything 3-D printed, essentially.”

He determined the price of each product by measuring its weight and sold them to his classmates.

“I remember that when fidget spinners were a thing, I was making like $500 a week for a few months.”

Smith said his classes at HCC occasionally interfere with being at the store, but he makes it a point to be in Captain Candy at least five times a week. When he is not there, his three other employees operate the store.

Still in his freshman year, Smith is pursuing his associate degree in business. After HCC, he plans on transferring to the University of Massachusetts Amherst to complete a bachelor’s degree. He hopes to pursue an MBA following that.

“This isn’t what I’m going to do for the rest of my life,” Smith said. “I want to, at some point, do something bigger than this, but I’m not sure what.”

Despite the difficulties that come with owning a business, Smith is optimistic about the future profitability of Captain Candy.

“I’m not too worried; it’s a stable company,” Smith said. “It’s candy, you don’t have to be serious all the time. It’s definitely fun.”

Captain Candy, by the numbers

From The BizON Blog Team!

Remember, if you are interested in receiving the latest business news, insights and opportunities from BizON, you can subscribe to our newsletter here or join our text messaging list here. Also, if you are not a BizON user yet, what are you waiting for? Click here!

Opinions expressed here by Contributors are their own.

*The original article is here and is written by Matt Berg